“A little bit of history, community, and group work,” said Brownwood High School Art Teacher Kimberly Van Huss. Her Art IV students stood before a large wall inside the World War II-era officer’s gym, applying coats of bright blue and white paint to a large, white wall. The historical site, built on the Camp Bowie grounds, is in the process of being renovated by new owners Tanya and Lou Collazo. The couple are transitioning the Gators Fun Factory at Heartland Mall in Early to be located at the historical gym. When Van Huss heard about the renovations, she contacted Collazo and asked if her class could participate in the project. “Tanya said it would be nice,” Van Huss said. “’We have tons of walls to paint,’ she said, and then told me it would be World War II-themed.” The airy space, which will soon house a skating rink for the community to enjoy, exhibits historical architecture in its sweeping, domed ceiling and concrete support structure. The renovated Gators Fun Factory will continue the historical theme of Camp Bowie, and Van Huss ran with the idea. “I printed out a bunch of Camp Bowie and World War II papers and they discussed it, researched it, collaborated on their drawings, and here we are,” Van Huss said. “They were excited about researching and didn’t exactly realize what Camp Bowie was. These younger kids think, ‘Camp Bowie -- that’s where the pool is.’ So, to know our historical background was exciting.”

Van Huss presented the project to her class as soon as school began for the 2019-2020 school year. Each student explored the research, drew out ideas, and Van Huss organized their drawings into a collaborative mural. “Lexus Avila drew an old airplane, at a good angle,” Van Huss said. “It’s the type of plane that crashed in Lake Brownwood -- the propeller is at the museum downtown. The kids were amazed there was a plane in the lake. We wanted a silhouette of a soldier; we looked at a lot of pictures of soldiers. Then they decided we needed an eagle, and a flag, and bluebonnets, because we are in Texas. They wanted a cross in it. We just kept talking and talking, and I put their pictures together.” The colorful mural displays a richly textured tribute to Camp Bowie and the significant cultural and architectural influence it played on the Brownwood area.

Built in 1940, Camp Bowie was a major defense project and more than 15,000 men were employed to help build it. More than 115,000 acres were used as training grounds. The population swelled to 60,000 men at one point in time. Eventually, Camp Bowie hosted German prisoners of war. In 1943, the camp had 2,700 prisoners of war who were day laborers for nearby farms. After war was declared over in 1945, much of the camp was distributed and sold off. Now, Camp Bowie trains an average of about 70,000 people per year.

Van Huss and student Sarah Griffin used a large opaque projector to display the mural and spent one evening tracing the outline in pencil on the white-washed wall. The students worked as a unit on Thursday, October 3, throughout the day to paint the mural. Additional finishing touches were applied on Monday, November 18. Art IV student Patrick Madawe has been interested in art and drawing since the age of five. He drew the character displayed within the bottom right corner of the mural. “I read an article about Camp Bowie, about a soldier and his life during the camp,” Mandawe said. “I drew the soldier. It tells a story of how he lived.” Art IV student Ivy Townsend carefully laced her blue-tipped paintbrush around the penciled edge of the mural outline.

The Art IV class built a story of freedom, heritage, and character, using a little imagination, a lot of skill, and weeks of effort. Van Huss hopes this project leads to others and plans to return in the spring to add paintings of planes on each side of the mural. “They love getting out of the classroom,” Van Huss said. “They want to do more out in the community.” 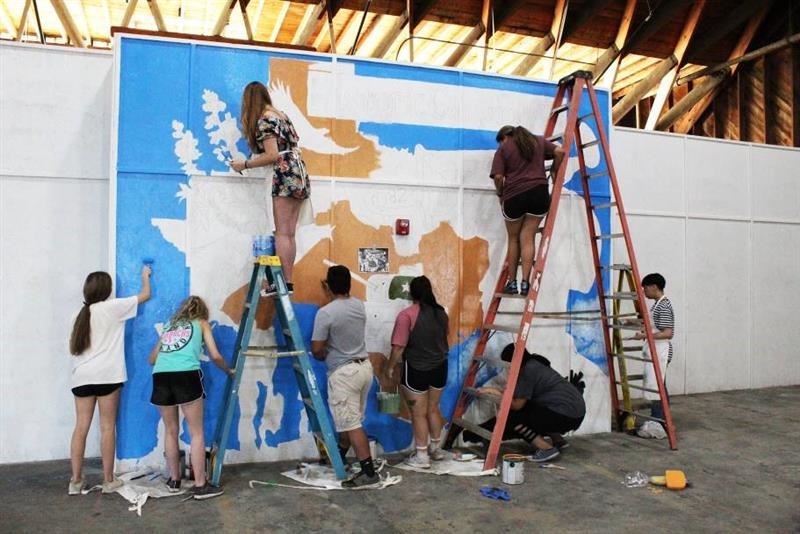 Above: BHS Art students painting a mural in the old Camp Bowie Gym, soon to be the location of Gators Fun Factory. 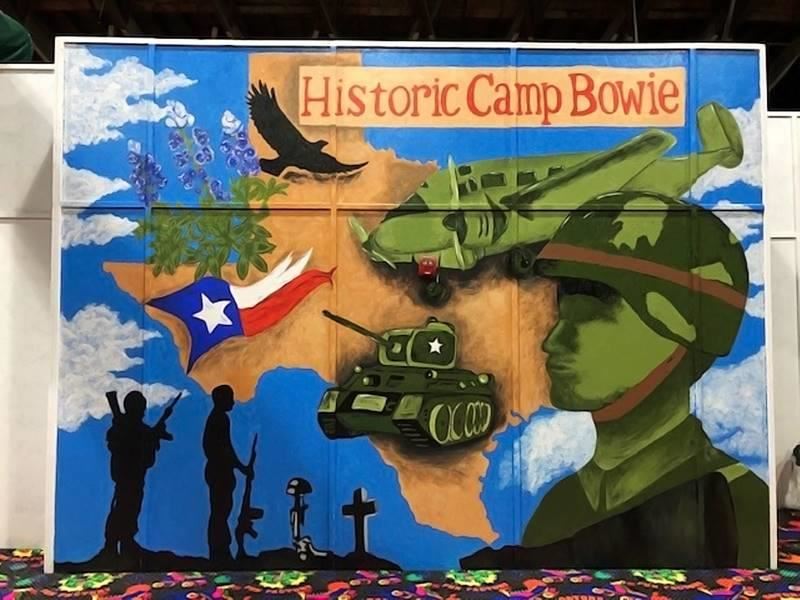 Above: The final mural painted by BHS Art students.