“Come and trip it as you go,” George Frideric Handel’s lyrics proclaim. However, one Brownwood High School student used them to keep her feet steady beneath her as she stood before her judges. Choir student Jordan Roberts performed at the 2019 Texas State UIL Solo & Ensemble Vocal Contest in June, earning the rank of “one” (the highest ranking). Not only did she earn a one, she was awarded the title, “Outstanding Performer.” According to the award letter from the UIL State Director of Music, “of the 25,000 musicians who performed at TSSEC, only 2-3% of the solo performances earned the distinguished honor of being recognized as an Outstanding Performer.” This means that less than 500 students throughout the state of Texas participating in this year’s event earned the award and the draped medal accompanying it. “The medallion is identical to those awarded to state champions in all UIL events,” the award letter stated. “Awards of this nature do not come easily and reflect the efforts of many individuals...your talent, dedication and hard work made this accomplishment a reality.”

Roberts performed “Come and Trip It,” while battling a sore throat and seasonal allergies, yet maintained her composure using her years of theatrical and musical training. “I had allergies that day; good way to start the day,” Roberts said. “I was very nervous. I went into the room and I was so focused on my voice not cracking in the middle of my song. After I sang, the judge said, ‘Your breathing was awesome.’ No judge has ever told me that’.” Roberts performed a piece reserved for upper-level singers with a developed voice. “The piece is perfect for her,” said BHS Choir Director Jennifer Reeves. “It was meant to be.” Reeves has been working with Roberts throughout the years and suggested the piece to the eager Roberts. “This piece is so hard, you don’t want to give it to an underclassman,” Roberts said. “You wait for a junior or senior, when the voice is a little more mature. So, I’ve been waiting. Two of my friends have sung this piece and I’ve just been thinking, ‘I’m ready. I want to sing this song’.”

Roberts has been practicing music since she was three years old; her many years of training are paying off as she pursues a higher rigor of performance and expertise. “This type of singing is different from musical theatre,” Roberts said. “It’s classical singing. You don’t put on a full-blown performance with choreography, but you still want to have that connection with the piece and understanding it… It’s so important to translate it and what the story says, and then convey it through dynamics and facial expressions. I did that with ‘Come and Trip It’ this year. There’s this staccato note and I had fun with it. The words were very repetitive. So when I produced this piece, I focused on the dynamics and phrasing, when I need to decrescendo, when to ritardando, and made it musical, instead of just standing at a piano and having the judges watch me.” Roberts’ work on the piece created a magical moment for everyone in the room as she sang. “Our accompanist was with her,” Reeves said, “and they both came out [of the room] knowing something special had happened.”

Roberts first began working with Reeves at Howard Payne University six years ago in the pre-college music program. The two have cycled around and continue to work together, with Reeves championing her students to master their skills. “A lot of kids are so focused, when they are nervous, they think about how hard they need to work. She wasn’t the ‘normal’ nervous, she was thinking, ‘I have to breathe.’ So thank goodness for allergies. She just let it go. And it paid off.” Thirteen BHS students performed at this particular competition, two of them being awarded with a rank of “one.” “The judges were hard, in a good way,” Reeves said. “They were all professors from great universities. I kept telling my students, if you got a two, be happy. If you got a one, that’s huge.” Roberts’ obvious passion for music shows in her energy toward the program and pursuing excellence. “I was so excited, so proud, so thankful that all my teachers got me there,” Roberts said. “I couldn’t do it without them and without their guidance. I was so excited to share this with my class and Mrs. Reeves. Music is my life. When I talk about it, I just smile, because I get so excited when I look at a new piece of music or a new song to sing. I get to explore new notes, new ranges, new emotions. I get to better myself. Music is everything.” 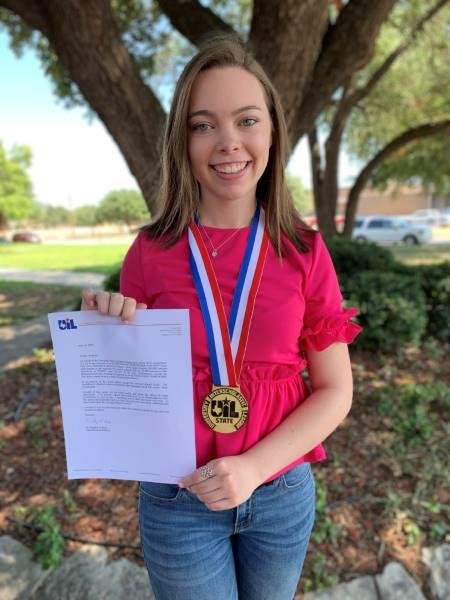 Above: BHS Choir student, Jordan Roberts was awarded the title, “Outstanding Performer” in an award letter from the UIL State Director of Music.