The 2018-2019 Woodland Heights Green Team ended the last school year having collected 50,657 pounds of recycling.  The Green Team has grown larger, and they collect quite a bit more recycling than when it began 11 years ago. In the first few years, the team collected around 2,000-3,000 pounds.

The original team developed a “hiring” process, complete with a job-like application and essay questions, along with three references that must be obtained attesting to strong, solid character. Part of the “job” requirements include passing grades in all subjects, and a strong work ethic, along with honor and integrity demonstrated in all areas (the classroom, playground, and outside activities).

The Green Team meets on a set schedule after school on specified days and the students are organized into groups that are assigned to various areas of the school. Each group has a leader that serves in that capacity for four weeks at a time.

“The teams meet together at the start time, receive their assignments and then get to work,” said Woodland Heights Elementary Counselor and Green Team Sponsor, Kimber Bennett. “They learn about leadership, working as a team, being a leader and how one functions as such within a team unit, how to problem-solve and resolve conflicts.”

The teams report to their assigned areas to collect and sort the recycling before loading it in the trailer provided by the City of Brownwood. At the end of the session, all the teams meet back together to review the work process and discuss areas in which the teams worked well together and areas that might need to improve for the next week.

“At the beginning of the year, the teams take about an hour to collect, sort and load the trailer,” noted Bennett. “By the end of the year the teams can have the entire school done in twenty-seven minutes.”

Listed below is the amount of recycling that has been collected by the Woodland Heights Green Team for the past 7 years:

“I think it is important to recycle because it helps our environment,” stated 2018-2019 Green Team member, Rebekkah Delgado. “It also can help lakes, oceans, and seas by making them cleaner.”

2018-2019 Team member, Kensie McBride, stated her greatest challenge was, “sorting recycling into the right containers.”  She added, “Recycling reduces how much trash we have in the word,” and noted that recycling becomes easier when working as a team.

On behalf of the Woodland Heights Green Team, Bennett also expressed her thanks to Brownwood ISD, the BHS Environmental Class, and Stan Pachall for making sure they received recyclable items from the other campuses. 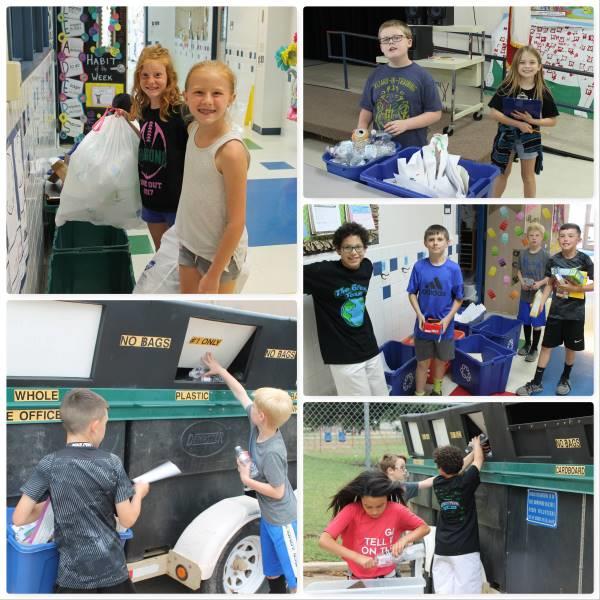